Vacation accommodation in Rome and the Roman countryside

Main sights of Tivoli near Rome in Italy 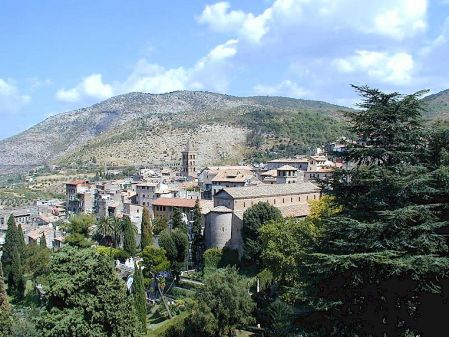 A panoramic view of Tivoli
Tivoli is one of the most popular day excursion destinations for both Romans and visitors to Rome, and should not be missed. Tivoli is located on a steep Sabine hillside 30 km from Rome and, aside from its splendid views out over the Roman Campagna, offers two of the most interesting sights of the Roman Campagna, the Villa d'Este and Hadrian's Villa.

Tivoli was the anient Roman town of Tibur and is located at the waterfalls of the Aniene river, where it issues from the Sabine hills. The name of the city came to be used in diminutive form as Tiburi instead of Tibur and so transformed through Tibori to Tiboli and finally to Tivoli. But its inhabitants are still called Tiburtini and not Tivolesi.

Cato the Elder stated that Tibur was founded by Catillus the Arcadian, a son of Amphiaraus, who escaped the slaughter at Greek Thebes. Catillus and his three sons, Tiburtus, Coras, and Catillus, drove out the Siculi from the Aniene plateau and founded a city they named Tibur in honor of Tiburtus. According to a more historical account, Tibur was a colony of Alba Longa. Historical traces of settlement in the area dates back to the 13 C BC.

From Etruscan times Tibur, a Sabine city, was the seat of the Tiburtine Sibyl. There are two small temples above the falls, the rotunda traditionally associated with Vesta and the rectangular one with the Sibyl of Tibur, whom Varro calls 'Albunea', the water nymph who was worshipped on the banks of the Anio as a tenth Sibyl added to the nine mentioned by the Greek writers. In the nearby woods, Faunus had a sacred grove. During the Roman age, Tibur maintained a certain importance because it lay on the Via Tiburtina, extended as the Via Valeria, by which the Romans crossde the mountain regions of the Apennines towards the Abruzzo, the territory of some of their most implacable enemies, Volsci, Sabini and Samnites.

Tibur was at first an independent ally of Rome but allied itself with the Gauls in 361 BC. Vestiges remain of its defensive walls of this period, in opus quadrata. In 338 BC, however, Tibur was defeated and absorbed by the Romans. The inhabitants acquired Roman citizenship in 90 BC and Tibur became a resort area famed for its beauty and its copious good water, and was enriched by many Roman villas. The most famous one, of which the ruins remain, is the Villa Adriana (Hadrian's Villa). Maecenas and Augustus also had villas at Tibur, and the poet Horace had a modest villa: he and Catullus and Statius all mention Tibur in their poems. In 273, Zenobia, the captive queen of Palmyra, was assigned a residence here by the Emperor Aurelian. The Piazza del Duomo occupies the site of the Roman forum.

In 547, in the course of the Gothic War, the city was fortified by the Byzantine general Belisarius, but was later destroyed by Totila's army. After the end of the war it became a Byzantine duchy, later absorbed into the Patrimony of St. Peter. After Italy was conquered by Charlemagne, Tivoli was under the authority of a count, representing the emperor.

For Hotels in Tivoli and neighbouring towns, click here.

From the 10 C onwards, Tivoli was an independent municipality governed by its elected consuls and was the fiercest rival of Rome in the struggle for the control over the impoverished region of central Latium. The Emperor Otto III conquered Tivoli in 1001, and it fell under the Papal control while managing to keep a variable level of independence until the 15 C. Symbols of the city's strength were the Palace of Arengo, the Torre del Comune and the church of St. Michael, all built in this period, as well as the new line of walls (authorised in 1155) needed to house the increasing population. Reminders of the internal turbulence of communal life are the tower houses that may be seen in Vicolo dei Ferri, Via Postera, Via del Seminario and Via del Colle. The entries are not at street level, but were reached by removeable ladders.

In the 13 C, the Senate of Rome succeeded in imposing a tribute on Tivoli, and arrogated to itself the right of appointing a count to govern it in conjunction with the local consuls. In the 14 C, Tivoli sided with the Guelphs and strongly supported Urban VI against Antipope Clement VII. King Ladislaus of Sicily was twice repulsed from the city, as well as the famous condottiero Braccio da Montone.

During the Renaissance, popes and cardinals did not limit their embellishment programme to Rome. In 1461 Pope Pius II built the massive Rocca Pia to control the always riotous population and as a symbol of the permanence of papal temporal power here.

From the 16 C, the Tivoli saw further villa construction. The most famous of these is the Villa d'Este, begun in 1549 by Pirro Ligorio for Cardinal Ippolito II d'Este and richly decorated with an ambitious program of frescoes by the Zuccari brothers and other.

In 1527 Tivoli was sacked by bands of the supporters of the emperor and the Colonna, important archives being destroyed during the attack. In 1547 it was again occupied, by the Duke of Alba in a war against Paul IV, and in 1744 by the Austrians. 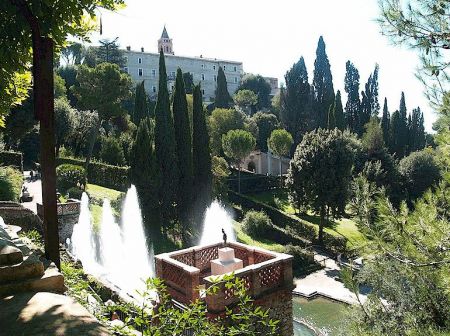 The Renaissance Villa d'Este was built in the 1550s for Cardinal Ippolito d'Este, the son of Lucretia Borgia, and is one of the most interesting sights of the Latium, indeed, of all Italy. Click here for more about the Villa d'Este.

For those with an interest in antiquities, the Villa Adriana, one the greatest Roman villas, is worth a day to itself. The Emperor Hadrian conceived a countryside dwelling here that would by normal standards be considered a town. A gigantic complex with underground service passages big enough for vehicles, the Villa incorporates lakes, fountains, libraries, baths, temples and gardens.

In 1835 Pope Gregory XVI added the Villa Gregoriana, a villa complex pivoting around the Aniene falls. These were created through a tunnel in the Monte Catillo, to give an outlet to the waters of the Aniene sufficient to preserve the city from inundations like the devastating one of 1826.

After the flood of 1826, the river was diverted and this bridge was built. It was destroyed by retreating German troops in 1944, but rebuilt afterwards. The bridge offers impressive views over the gorge, waterfall and temple immortalised in so many paintings dating from the Grand Tour era.

Temple of Vesta and Temple of the Sybil

The characteristic round Temple of Vesta occupies a panoramic position above the valley of the Villa Gregoriana, about ten minutes' walk from the Villa d'Este. A squarish ruin next to the round temple is thought to have been a temple dedicated to the Sybil. Around the temples are dotted the tables of a restaurant; a pleasant place to relax in the middle of antiquity. The area where both these temples is located was the ancient acropolis, and provides excellent views of the cascades and valley below.

Other sights include the Rocca Pia fortess erected by Pope Pius II, the ruined Roman Amphitheatre, the Romanesque Church of St Sylvester and the Cathedral of St Lawrence (San Lorenzo) with its baroque facade and art including a thirteenth-century wood carving.
For Hotels in Tivoli and neighbouring towns, click here.
Accommodations in Rome © ammonet InfoTech 2006 - 2022. All rights reserved.